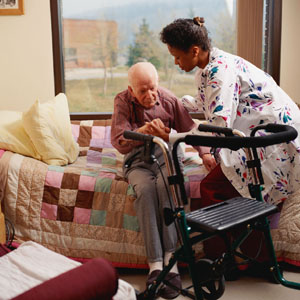 Single premium immediate annuity (SPIA) products help shield money for one spouse when the the other has to enter a nursing home for care.  According to Financial Advisor Magazine’s “Sales of Nursing Home Annuities Soar“, Maureen Nevin Duffy says that these annuities are right for middle income clients.  When one spouse has to enter a long term care facility and the couple does not have long term care insurance, the other spouse will quickly spend down all of their money to pay for this care before Medicaid kicks in.  Very wealthy people typically have enough savings to cover the long term care needs of one spouse.  Couples that have little to no retirement savings can rely on Medicaid to cover the long term care costs almost immediately.  But those couples in the middle class with around $300,000 in retirement savings are really in a bind.

A Medicaid compliant SPIA helps shield the couple’s money so that the spouse who remains in the home doesn’t have to spend down all of their money in order for the other spouse’s long term care needs to be funded by Medicaid.  One financial advisor calls SPIAs a “godsend” for middle income families.  The rules governing Medicaid compliant SPIAs vary between states because Medicaid is run jointly as a federal and state program.  But overall the spouse who is staying in the home is saved from spending down all of their money in a couple of years on long term care costs for the other spouse.  The institutionalized spouse still retains the care they need, which is funded by Medicaid.  The law allows the non-institutionalized spouse to keep around $100,000 in assets that are in addition to any family home they are residing in.  Then their cash flow is limited to around $2,000-$3,000 per month.

There is more training required for advisors, clients and even lawyers when it comes to using Medicaid compliant SPIAs to preserve clients’ wealth.  Financial Advisor’s article offers an excellent example of a couple living in Massachusetts with $300,000 in liquid assets when one spouse has to a enter long term care facility.  The remaining spouse would be allowed to keep $109,000 of the assets and the rest, $181,000, would have to be spent down to pay for the nursing home care before Medicaid would cover the cost of the remaining care.  With long term care facilities costing an average of $10,000 per month, this money would be spent fairly quickly.  If the spouse buys a Medicaid compliant single premium immediate annuity with the $181,000 instead, the couple’s assets would be converted to a lifetime income stream for the spouse remaining at home.  This would shelter the couple’s $300,000 savings rather than spend it all on nursing home care. It would also protect the lifestyle of the spouse who remains home and could live for a decade or more.

If the non-institutionalized spouse dies before receiving all of their income payments, the money then goes to pay for the long term care of the other spouse.  The money also goes to Medicaid if the second spouse also has to enter a long term care facility.  The main drawback of using this type of SPIA is that there is no money left to beneficiaries after the death of the couple.  It’s purpose is to protect the standard of living for the spouse who remains in the home when the other enters long term care.  If a couple is concerned about leaving something for their heirs, they can do that before purchasing their SPIA via life insurance, gifting money or a death benefit annuity product.  Medicaid compliant SPIAs are a lesser known tool that can shelter a middle income couple’s savings when one of them has to enter a nursing home for long term care.  The IRI says that sales of these SPIA are on track to break records and reach $10 billion this year.