It’s well known that variable annuity (VA) sales have been in decline, and issuers have no great appetite for the risks associated with lifetime income guarantees. And then there’s the uncertainty over the fate of the Department of Labor fiduciary rule, which has put at least a temporary chill on commission-based sales of VAs in retirement accounts.

But the big VA sellers continue to hang in there and tweak their offerings in order to generate sales without introducing hard-to-manage risks. For instance, there’s the enhanced death benefit recently announced by Prudential, the fourth-ranked individual VA seller in 2016 with sales of $8 billion. AXA is also finally enjoying success with a non-income variable annuity, AXA’s Structured Capital Strategies indexed VA. Until relatively recently, initially sluggish sales were thereafter up and down.

“There have definitely been some challenges in the VA world in sales,” said Jim Mullery, head of distribution and sales for Prudential Annuities. “The ambiguity around the Department of Labor’s fiduciary rule has had an impact. But we are committed to this marketplace.”

Prudential and AXA, along with Jackson National, the AIG Companies, MetLife, Ameriprise Financial, Lincoln Financial and Nationwide are all perennial leaders in the VA space, where the top 10 issuers routinely account for about 80% of sales.

To varying degrees, all companies relaxed the torrid VA sales paces that preceded the financial crisis and persisted until about five years ago. They have either cut back on sales of living benefit rider products, de-risked their remaining income benefits with volatility-managed funds and less generous deferral bonuses, or switched their marketing efforts to accumulation-only contracts.

But this doesn’t mean these insurance companies have any intention to exit the VA business. Prudential, for one, has consistently said that it’s in the VA business to stay.

It has an advantage: Its VA book-of-business may be more stable than that of competitors because it controlled the risk of its living benefit riders by employing a form of “constant-proportion” portfolio insurance. In its Highest Daily VA contracts, for example, the allocation to bonds automatically rises when equity values go down, thus protecting each account’s ability to fund its guarantee. And with its Legacy Protection Plus product, Prudential offers no income rider for buyers who want the product’s enhanced death benefit.

The Legacy Protection Plus offers a 7% simple interest roll-up until the benefit base reaches 200% of the first-year purchase payments or the contract anniversary on or after the owner’s 80th birthday, whichever is earlier. On the death of the contract owner, the beneficiary receives the greater of the account value or the benefit base.

With the enhanced death benefit, this VA gives heirs or beneficiaries protection against market risk while allowing the owner to take income (with taxable earnings out first) as needed or to postpone taxes on the gains (except for required minimum distributions starting at age 70½) by not taking withdrawals.

(There are no special tax benefits to transferring money through a non-qualified variable annuity death benefit, however. Heirs can’t receive the death benefit tax free, as they would the proceeds of a life insurance policy, and there’s no potential “step-up in basis” that would eliminate capital gains taxes for heirs. Instead, they pay ordinary income tax on the difference between the cost basis of the contract and the death benefit. 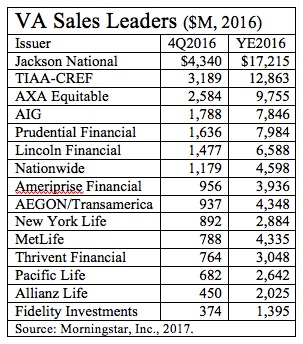 As of the end of the third-quarter of 2016, Prudential was one of seven variable annuity issuers with more than $100 billion in VA assets. Among issuers of individual VA assets, it ranked third with $154 billion. MetLife led with $166.7 billion and Jackson National was second with $154.3 billion. Prudential finished 2016 in fourth place among individual VA sellers, with sales of $7.98 billion in 2016, down from $8.72 billion in 2015.

When AXA introduced an indexed variable annuity in 2010, called Structured Capital Strategies, it was difficult to know what to make of it. Like fixed indexed annuities, it offered downside protection with upside caps; but it offered much higher caps than FIAs could offer because it protected the contractor owner from only the first 10% to 30% of the loss in a down year, rather than from 100% of a loss. One, three and five-year terms, as well as several index options, were made available.

At the end of 2011, the contract was ranked 42nd among VA contracts with sales of $747 million, according to Morningstar. Then SCS started to climb the chart—in part because the sales of so many other contracts were falling and in part because advisors were gradually warming up to it. Sales reached $1.4 billion in 2012 and $1.54 billion in 2013. Sales slipped to $972 million in 2014 but bounced back in 2015, selling $1.45 billion (14th place). In 2016, the AXA indexed VA posted sales of $2.62 billion, the seventh best VA seller for the year.

“After we started this category of product, it took a while to get financial advisory firms to say yes, and then they started to say that it made a lot of sense,” said Kevin Kennedy, managing director of head of individual annuities for AXA in the U.S. “Now there are three or four companies selling indexed variable annuities, and probably more coming in. (MetLife and Allianz Life are among the issuers of indexed VAs.) Our competitors are validating the space.”

“It’s been a good couple of years,” Kennedy added. “We just crossed 100,000 contracts and $10 billion in total sales in Structured Capital Strategies.”

AXA continues to innovate the product. Last year, for example, it added an “annual lock,” which allows buyers of the annuity to purchase an S&P index-linked product and get a generous 10% cap every year for five years, as well as downside protection of up to 10%. By contrast, other indexed products typically guarantee a good rate only at the start of the contract.

Because this is a deal for five years, not life, Kennedy admitted this product doesn’t necessarily open up a “buy and die” relationship with customers. “Buyers are not committing to us forever,” he said. “They re-evaluate their options at the end of five years.”

By this is OK by AXA. Product innovations, after all, are a work in progress. What is important is that Prudential and AXA, among other annuity vendors, are introducing interesting changes in variable annuities to help keep VAs viable. This is good for annuity customers in the long run because it helps assure they will have more variety of products from which to choose, not less.

Steve Kaufman contributed to this article.